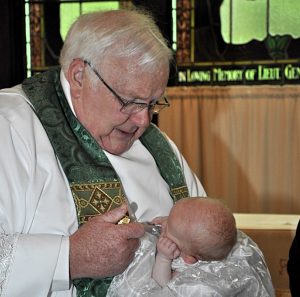 Reverend David Chapman has been a member of the Parish of Fall River for almost 12 years and has been ordained as a priest for almost 7 years.

Born in the other Halifax (England), he was educated at Nottingham University, where he earned a BA in Education Management and a later MSc in education law.

After working in a few schools, he was appointed Principal of one, and was there for 18 years. After that he intervened as a “trouble shooter,” taking over failing schools to prepare them for Government Inspection. His final position, before leaving for Canada, was as a Regional Officer with the Association of School Leaders, covering the North of England and supporting School Principals who were in trouble – whether with the law, with their governors, with the church or with parents. There was never any shortage of work!

After 10 years of this, Linda and David retired to Canada, where Linda has a brother whom they had been visiting frequently for some 30 years. They live  in Fall River, along with two very active Golden Doodles.

While in England, Rev’d David was active in both the Methodist and the Anglican churches, and he preached regularly in both.  He was also a member of both York Minster choir and Derby Cathedral choir.

When he came to Canada, he had no real intention at all about becoming an ordained priest, but the Lord moved in one of His mysterious ways, and from Lay Reader he become Deacon and then Priest. 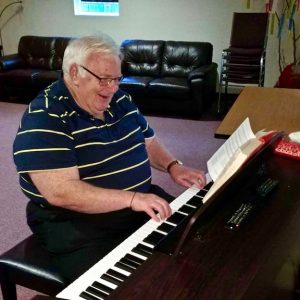 Rev’d David is a music maker and a sense maker, who brings a rich historical context to his sermons and his weekly Bible studies at St. Thomas, Fall River.